In 2015 I released the first version of VertiPaq Analyzer, a tool to quickly analyze the structure and data distribution of a Tabular model that can be used with Analysis Services and Power BI.

During these years I incrementally improved the original structure, based on a Power Pivot data model that connects to the Tabular Engine through the an Analysis Services connection (also available for Power BI Desktop) reading information from Data Management Views (DMV). Even though very successful, this approach has some limitations that were impossible to overcome without a different approach.

After a failed attempt made one year ago (we learn by making mistakes…) I think we now have a promising architecture that can be shared in a public preview. Because this is not a “general availability” release, let me introduce the technical side first. The goal in this stage is to get early feedback in order to adjust the direction (and fix bugs) for an “official” release that will be much more “user-oriented” for the documentation and the features available. The remaining part of this post is more technical and detailed, providing the background information required to understand what is going on. If you just want to “use” VertiPaq Analyzer without having to understand these details, just wait a few weeks for a more stable release!

Using the VertiPaq Analyzer libraries, a client tool can easily extract the information from a Tabular model, export them in a standard file, and read the same information for visualization purposes.

The VPAX file format is a ZIP file containing the following files:

DAX Studio supports the VertiPaq Analyzer Libraries from version 2.9.4. While in preview, the features must be enabled in the Advanced Options of DAX Studio:

Once you enable the Show Export Metrics button, you have these features available in the Advanced Ribbon. 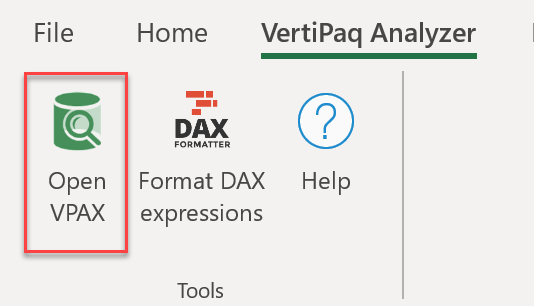 While the preview integrated in DAX Studio is useful for a quick look, the flexibility of Excel allows you to navigate through more details, especially in large Analysis Services models where you need to investigate in compression of individual segments. Finally, the new tab with the DAX expressions shows any DAX expression included in the data model (not only measures and calculated columns/table, but also KPI, Detail Rows, role filters, calculation groups, and more), which you can filter through the Type column.

As you can imagine, this is just the beginning of new features we can add in the future in many tools. However, it is necessary to reach the same features and reliability of VertiPaq Analyzer v1 before releasing a v2. You can help improving VertiPaq Analyzer while in Preview by doing the following: