Visit http://daxstudio.org to read the full documentation and download the latest release of DAX Studio. The project is open source on GitHub.
Darren Gosbell is original author and the maintainer of the project, which has many contributors. SQLBI provides the EV code signing certificate and appears as the publisher of the tool, which can be safely downloaded and installed without SmartScreen warnings. 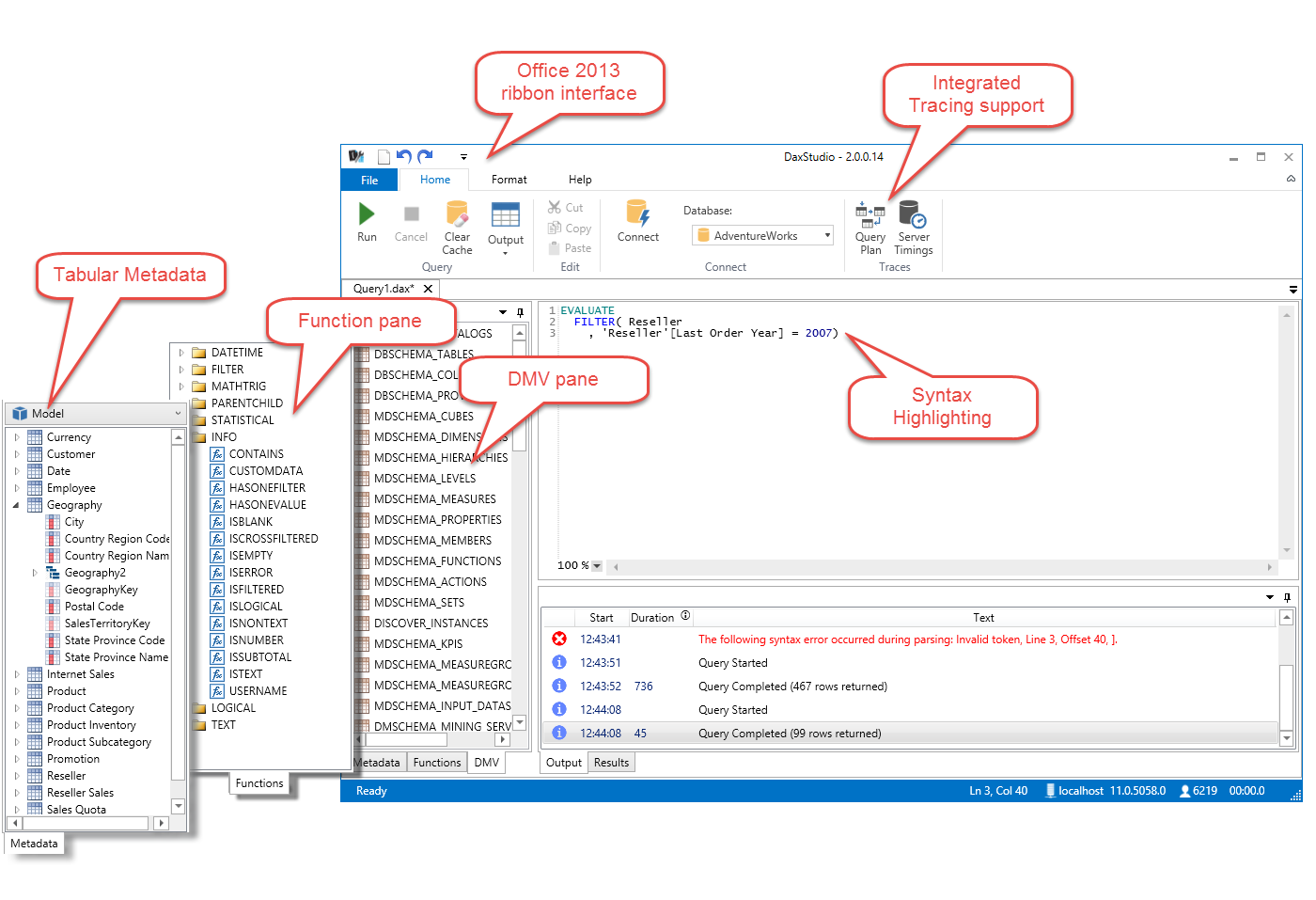 Fixed – Exception thrown on startup. Only occurs when there is no history of previous data sources.

Added – Installer now signed with an EV certificate that prevent warnings from SmartScreen
Added – “Initial Catalog” setting to the Advanced Options in the connection dialog, to choose the initial database when connecting to a very large model or slow connection (like AzureAS or VPN). This minimizes the metadata retrieved from the server before providing control to the user.
Added – Roles and IsAdmin properties to Database tooltip
Added – “Format Query” has a split-button to choose the style of formatting by clicking on the bottom half of the button
Added – Portable build as a download option
Fixed – Power BI External Tools – installer not correctly updating path in daxstudio.pbitools.json file if a non-default install location is used
Fixed – Exporting tables with no rows would throw an error
Fixed – Autosave not recovering open files for all types of crashes
Fixed – Improved tooltip sampling to prevent full column materialization
Fixed – Crash when attempting to export using invalid manual connection string
Fixed – Re-connecting to a pbix file that has been closed and re-opened after launching from External Tools does not work

Added – (Preview) Query Builder
Added – (Preview) Query Benchmark
Added – Quick Access buttons for New, New (with current connection) & Save
Added – Export button to all trace outputs
Added – Full filename tooltip to tabs
Added – Note in the Database tooltip that the Database Id can be copied using a right-click
Added – Formatting to shorten asazure: and powerbi: server names in the status bar so that the key information is visible
Added – Partitions tab to the Model Metrics views
Added – Sample of any missing keys to the relationships tab in the Model Metrics (these keys are not saved for privacy reasons when exporting to a vpax file)
Promoted View Metrics (Vertipaq Analyzer) from preview status to general availability
Promoted Export Data feature from preview status to general availability
Updated syntax highlighting to align with DaxFormatter.com
Many bug fixes

Fixes an issue with the clear cache button not working.

Capture all queries run on a client, support for Azure AS, enhanced tooltips displaying min/max/distinct count values of each column plus random sample of 10 values, define dependent measures when right-click on a measure, publish/export functions to capture versions of DAX functions. Several bug fixes and improvements in stability. Added CrashReporter.net to manage submission of crash reports. Watch the video of improvements in the debug experience recorded by Marco Russo. Find more details in the blog post by Darren Gosbell.

Toggle delimiter switch between US (,) and European (;), Intellisense improvements and many small fixes.

Darren Gosbell wrote about the new features in DAX Studio 2.2.

Paul te Braak published an introduction to DAX Studio on his blog.

You can watch a video about profiling a query with DAX Studio by Marco Russo, who also wrote about new tracing features in version 2.1.

Please, give your feedback and vote for your favorite features.