The 2015 has been an amazing year for Power BI. One year ago, I was commenting on this blog the public preview of Power BI dashboards. A few days ago, Microsoft released the December update of Power BI Desktop and several updates of the Power BI service. In one year, we moved from a situation where Microsoft seemed (and actually was) too slow in the BI market, to a weekly (and sometimes daily) wave of announcements that are becoming hard to follow also for those enthusiast early adopters (but don’t misunderstand and read my lips: D O N ‘ T   S T O P   R E L E A S I N G   N E W   F E A T U R E S !!).

It’s clear that Microsoft is moving quickly to get the cloud market of BI services, which is still unexplored (after all, most of the companies keep their data on premises), but it is the only player providing a credible story of integration between cloud and on premises BI services (see “The Box is Back” and “Happy Together” pictures used at last PASS Summit). I finally see both strategy and execution working together. And execution is happening at the right speed, which has to be very fast nowadays.

There are a long number of features, improvements, technical details, and future directions that justify this analysis, but there is still a long road ahead before good comments become actual revenues and adoption in production. However, there are key changes I have seen in this year that strongly support a positive outlook for the entire Microsoft BI stack of technologies:

I have seen in one year a multiple of what I have seen in the previous ten years. In reality, Microsoft is leveraging many assets that were already in-house (the Tabular engine, Power Pivot, Power Query, Power View, and many other Azure’s based services), which development required several years. But the weak point has always been the “last mile” of data visualization and presentation. Other players were years-ahead in this area. And I think they are still ahead of Microsoft. You might have a scenario that already fits well with Power BI. Maybe your scenario will be “Power BI” friendly in a few months. But the trend is clear and the improvement is continuous. So, when I think to the considerations I will do in 12 months, I am very positive and I am also scared about the number of new features I have to learn. Since this is what I (probably we) asked for many years, I cannot complain!

I always take a look at stock price of companies to check whether financial results and expected outcomes correspond to my point of view. Unfortunately, it’s not fair to compare Microsoft with other specialized companies that work only in the BI market. So we cannot draw any conclusion by observing that Microsoft (MSFT) is at its highest point since Tableau IPO (DATA), whereas Qlik (QLIK) didn’t add much value to stockholders in the last 3 years (source: MSFT). 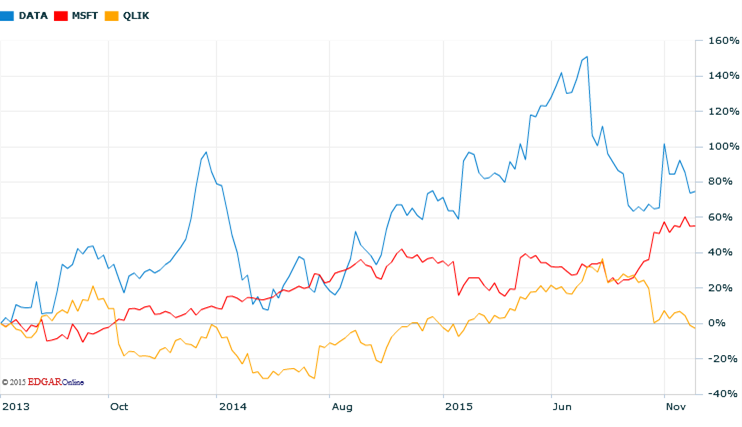 Without going in detail, there are many new features that will make Tabular a more “enterprise ready” platform. It’s not that the current version is not good, I helped many companies in successful adoption of Tabular, but there are many improvements in productivity and performance that completely justify the upgrade even before considering new features available in the new version. There will be a lot to write about that, and I really look forward to start doing that in a few weeks.

The magic key will be “Hybrid BI”. It’s already happening. I expect most if not all of the companies to move in an “hybrid” area for their BI solutions, where certain part are implemented on premises, and others in the cloud. And the reason to move on premises is not always preserving legacy investment, it could be requiring top performance of hardware for in-memory databases. For a certain size, you need to do an accurate hardware choice, where spending more is not necessarily better. In the very long term, I expect everything to move to the cloud, but the reality is that the two technologies will live together for a very long time, and Power BI is a good candidate to play a major role in this scenario.