Starting from the May 2020 version of Power BI Desktop, regardless of the Windows locale settings DAX always uses standard separators by default. This change does not affect most Power BI users around the world; but if you use the comma as a decimal separator and 10,000 is just ten and not ten thousand, then you are affected by this change.

First of all, you can restore the previous behavior as I describe in this post, but the recommendation and the default are now to use the standard DAX separators. I want to describe why this (I think good) choice was made and how I contributed to making this happen.

If you used Power BI Desktop before the May 2020 version and your Windows locale settings use list and decimal separators other than comma (,) and period (.), you always had a different user experience when writing DAX code. In all examples and articles, you have been seeing code like this:

In your Power BI Desktop, this code should have been written as:

Over time, Power BI Desktop inherited from Excel this idea of customizing separators in a formula. But Excel goes beyond that and translates the function names. While this could be a good idea for the user interface, when applied to a language it has the negative side effect of making the code samples available on the Internet harder to use with various languages.

Luckily, Power BI never went so far and only limited the translation to the separators. The more common situation is having the semicolon (;) as a list separator and the comma (,) as a decimal separator. However, having a different presentation of the DAX formulas in the user interface creates several issues:

In October 2019, I suggested implementing an option to choose separators characters in Power BI Desktop regardless of the Windows locale settings. 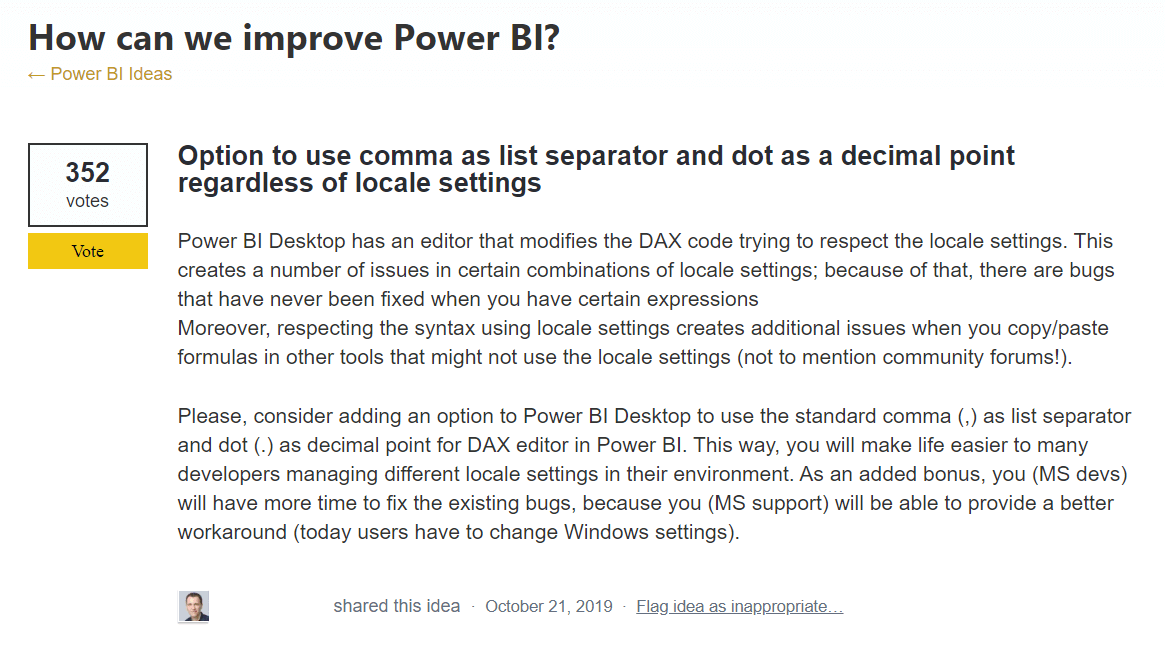 As part of the Power BI Contributor program, I have been able to work on this feature from December 2019 to April 2020. While the feature did not require months of development, the process of defining requirements, getting approval, implementing the code, and testing use cases requires coordination with many people – and this takes time.

Starting from May 2020, by default Power BI Desktop uses what I call “the standard separators” and ignores the Windows locale settings. We finally have one DAX syntax. You can copy and paste a code sample without having to worry about separators.

In order to minimize the impact, the following message appears the first time you edit DAX code in Power BI. 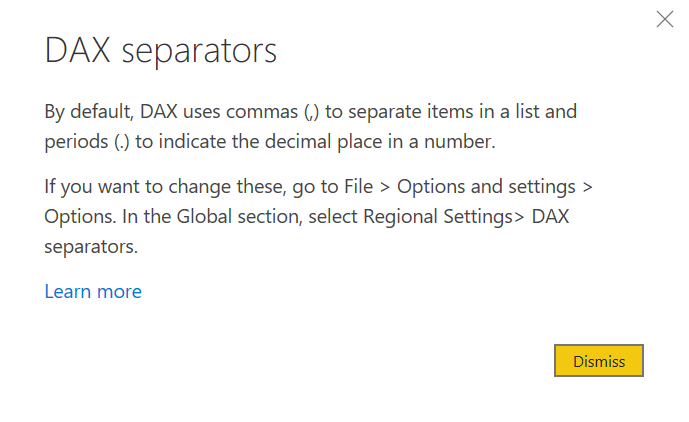 To be more accurate, this message dialog box is shown when:

Now, what if you prefer to keep your old habits? What if you just need to help Power BI users who do not like the new behavior, and you cannot convince them that it is right? You can restore the previous behavior of Power BI, which respects the localized separators. The Regional Settings dialog box shows the DAX separators section you see below, if and only if the Windows locale settings provide a different choice of list and decimal separators other than the standard ones used by DAX.

You cannot see the “DAX separators section” if your Windows locale settings are set to “English US”.

DAX Formatter and DAX Studio will continue to support the conversion of separators. However, going forward the feature should be taken as is – no more bug fixes, no more improvements, more time available for other features in the backlog!