SQL Server Analysis Services is a product that does not have its own product code, being sold as part of SQL Server. I think that also Microsoft does not know (and cannot know) the exact number of users. For this reason, it’s also more difficult to analyze the effective usage of the two different model types: Multidimensional and Tabular. Thus, only indirect observations are possible: books sold, web page reads, web searches, support calls, consulting engagements, and so on.

Accessing to public data is very hard. For example, it’s hard to discriminate between MDX and DAX web searches (Google Trends is an interesting tool for this kind of things). In fact, MDX is also the name of a car mode, and DAX is the main German Stock Index. As a book and blog author, I have some data that I can share.

I co-authored books that cover SSAS Multidimensional and we recently released a refresh of the Expert Cube Development with SSAS Multidimensional Models. The main change we had to do compared to the first edition published in 2009 was changing the screenshot. The average “life” of a book covering a software product is 2-3 years. Well, this book kept the same level of sales for 3 years, it decreased sales after the release of Analysis Services Tabular, and it increased sales with the release of the new edition. 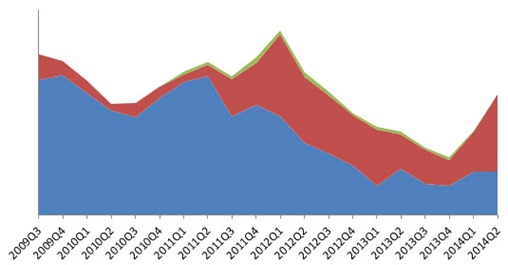 This can be a predictable behavior, but what is interesting is that the lifespan of this book is much longer than average (of other software product books) and the technology we talk about is not going to disappear in the market.

So what about SSAS Tabular? The book Microsoft SQL Server 2012 Analysis Services: The BISM Tabular Model has a shortest sales history, but it has a regular trend, with a slow decrease over time. 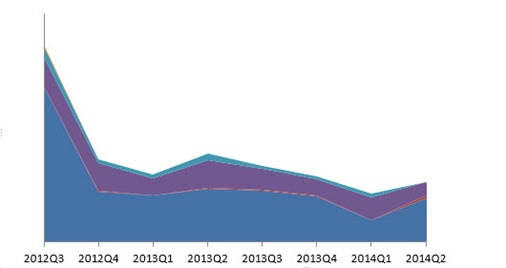 The spike you see in the first quarter is because of the different distribution of the two publishers, so just consider the trend in the following quarters.

A common question I receive also in comments to my blog posts is about the future of Multidimensional and MDX. Well, I’m pretty much convinced that MDX will be like C++. Nowadays, many people use C# (myself included, and I have been using C++ for many years). But for certain applications, C++ is the only option. Moreover, MDX is used by other products (Pentaho, SAP HANA, and others), whereas by now DAX is used only by Microsoft products (Power Pivot and SSAS Tabular).

I think that we will not see a single language/technology replacing everything we are using now. There is an interesting movement towards “R”, but I see it as an additional tool for certain users and usages, and not as something that can replace existing technologies. It is interesting to consider the effects of integration of these technologies, at least from a Microsoft point of view. The recent article on SQLBI about AutoExist and Normalization is just an example of the work we have to do in order to understand how to get the best from this integration, hoping that Microsoft will continue investments on the server side.

I do not expect major changes in MDX, but I would prioritize a better integration between MDX and DAX in both Multidimensional and Tabular. For example, I would love being able to write a DAX expression for an MDX measure in a Multidimensional model. Imagine the power of writing a leaf-level calculation in DAX, propagating its effects in attribute hierarchies defined in a cube. Very powerful, not easy to master, but really interesting for certain conditions (that I’m not inventing – I’ve actually seen customers that would have used it if it was possible!).

What about DAX? It’s an interesting language, much easier to learn than MDX for people with a SQL language background. I think it will be improved, we’re still working with a version 1 (remember MDX evolved between 2009 and 2005, adding SCOPE and other features), the only concern is that it is a Microsoft language, whereas MDX has been adopted by a number of companies (and we have many dialects – so don’t expect to see all MDX formulas working the same in all MDX products…).

So, when I say that I don’t see the need of migrating Multidimensional models to Tabular or other technologies, I have the support of the market adoption, which means there will be tools, support and knowledge. Can Microsoft do more and better for keeping this technology alive? Yes, definitely. Is the Multidimensional world lacking features that would be useful? Yes, but not in the measure new features are required by Tabular now. The next major release of Analysis Services will be important to answer to these questions.