Many people requested me how to connect to Power Pivot from an external program, without publishing the workbook on SharePoint or on Analysis Services Tabular. I always said it is not possible (for both technical and licensing reasons), but someone observed that Tableau is able to extract data from a Power Pivot data model connecting directly to the xlsx file. I wanted to investigate how they solved the limitations that exists.

From a technical point of view, you have to install a Tableau Add-In for Power Pivot Excel (it’s available for both 32 and 64 bit). Then, you connect using the Tableau Desktop software selecting the Microsoft Power Pivot connection. You choose a local Excel file and click Connect. The list of perspective appears in a combo box. 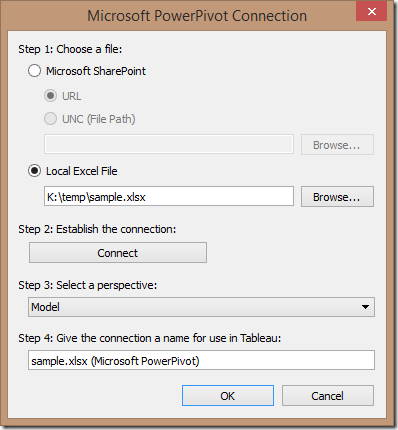 You click ok and you navigate into the Power Pivot data model. But what’s happening? Tableau runs an Excel instance (probably by using Excel object model) and then connects through the Tableau Add-In for Power Pivot that you installed before. Probably this add-in acts as a bridge between the process running Excel and the process running Tableau. This solve the technical problem, and it would be interesting to know how to use the same add-in from other programs without having to write the same add-in again. I know many ISVs that would love to do that!

But before starting your project in Visual Studio to do the same (after all, it shouldn’t be rocket science writing such a connector), consider the license agreement (EULA) of Office. It says that “Except for the permitted use described under “Remote Access” below, this license is for direct use of the software only through the input mechanisms of the licensed computer, such as a keyboard, mouse, or touchscreen. It does not give permission for installation of the software on a server or for use by or through other computers or devices connected to the server over an internal or external network.”. It seems we are in gray area here. The access to Excel is not direct. But at the same time, it is not made on another computer, and technically you are using keyboard, mouse and/or touchscreen when you are using Tableau Desktop.

This is certainly an unsupported scenario (and if the background Excel process hangs for any reason, you have to kill it in Task Manager). But if the licensing allows that, or if Microsoft tolerate this, probably many companies writing software (I have a long list of requests I received…) could be interested in doing the same.

I would love to hear some official word on this topic…