You define both calculated columns and calculated tables using a DAX expression, which the engine evaluates when you refresh one or more partitions or tables of a data model. The engine guarantees that they are evaluated according to any dependencies on other objects in the data model. For example, consider a Product table having a calculated column that computes the sum of the quantity sold by aggregating rows from the Sales table. Every time you refresh the Sales table (or any partition of it), the engine also updates the dependent calculated column in the Product table. Power BI does this automatically, whereas you have a finer control in Analysis Services, where you can rely on the automatic refresh of a Process Full, or control it by using the Process Data and Process Recalc actions.

Similarities between calculated columns and calculated tables end with the dependencies. They are different from a processing point of view, producing different results from a compression storage perspective. A special thanks to Akshai Mirchandani for the clarifications provided to write this article.

Processing of a calculated column

The native columns of a table are processed all at once, and the compression of each column depends on the best sort order of the entire table heuristically found by the engine (if the table is larger than one million rows, this could happen in segments to reduce memory impact). Calculated columns do not participate in the search of the optimal sort order. Thus, the compression of a calculated column cannot take advantage of a different sort order of the table rows.

For these reasons, a calculated column has two disadvantages over native columns:

Processing of a calculated table

The steps executed by processing a calculated table are described in the following list:

Step 3 is crucial. If the number of rows produced in the calculated table is very high, there is a good chance the entire table will be materialized in memory (in uncompressed state) before being compressed. This really depends on the query plan and on the query structure. For example, the result of a CROSSJOIN function only materializes the two table expressions used as arguments, whereas an ALL function could materialize all the existing combinations of the columns referenced.

You can observe the differences in storage compression by comparing the results provided by VertiPaq Analyzer using three different techniques to create the same table. In the Power BI example that you can download at the bottom of this article, there are three different versions of the same date table with three columns: Date, Month, and Day of Week. Each table contains all the days for 200 years, from Jan 1, 1901 to Dec 31, 2100. 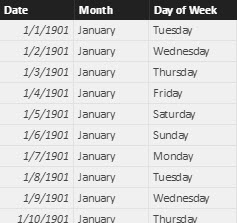 The columns choice maximizes the visibility of differences and similarities. The use of Date tables is just an example that is easy to reproduce. With other columns for a Date table or different tables you can observe different results, but the principle does not change. Calculated tables and native tables have the same compression, whereas calculated columns might produce different results – often less efficient.

The first table is Date Calc Column: there is a single column Date, generated by an M query that returns only the Date column, and two calculated columns with the following definition:

The second table is Date Calc Table, produced by a single DAX expression in a calculated table:

The third table is Date M and generates all three columns using an M query.

If you use VertiPaq Analyzer, you will see the results shown in the following picture. Please note you should follow the instructions described in the article Measuring the dictionary size of a column correctly to avoid measuring an inflated dictionary size. 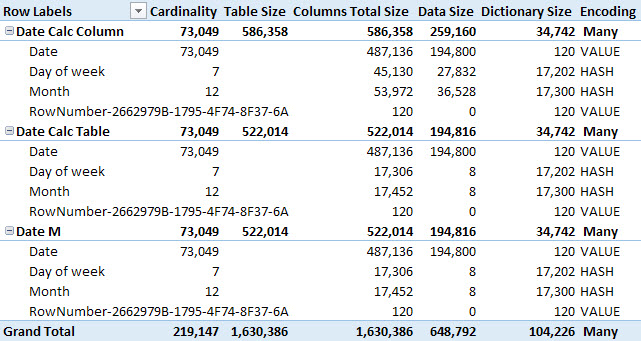 Note: if you are interested in techniques to create calculated tables in DAX, you should also read the article Using GENERATE and ROW instead of ADDCOLUMNS in DAX.

Calculated tables and calculated columns are both generated from DAX expressions evaluated after the process of other tables in a data model. Calculated columns might produce a lower compression rate that could also affect the query performance, requiring more time to scan the column. Calculated tables do not suffer from this issue, even if their content might be completely materialized in memory in uncompressed state before the compression. The memory required to process a calculated table depends on the number of rows and on the query plan of the DAX expression. Usually this is not a real issue for tables that have only tens of thousands of rows or less.

Returns a related value from another table.

Retrieves a value from a table.

Returns a number from 1 (January) to 12 (December) representing the month.