The Tabular model is common to Analysis Services, Power BI, and Power Pivot. You can find an introduction to KPIs in “Creating KPIs in Power BI Desktop”. This article describes in more detail all the KPI properties available, providing insights not available in the documentation.

Every measure of a Tabular model can be transformed into a KPI, which has these additional attributes compared to a measure:

By using the KPIs you obtain reports like the following.

The Target is just another measure that can be compared with the result of the expression assigned to the KPI measure. When displayed in the user interface, it is used to define a reference value compared to the value of the KPI. For example, the Target for Sales Amount could be the Budget Amount. Even though it is common to just reference another measure, the Target could be defined using any DAX expression.

The properties available for Target are:

The properties available for Status and Trend are:

Because the Description properties are not used by Excel and Power BI clients, we focus only on Expression and Graphic. The Graphic properties identify the group of graphical elements to use showing the Status and Trend attributes. The values allowed in Graphic are predefined strings that identify graphical elements with 3 states or 5 states. Each state is identified by an integer value according to the following table that shows the graphic icons supported by Power BI. Important: the name used in the Graphic properties does not match the visual representation every time. For example, Thermometer and Smiley Face do not match with what you would expect visually in both Power BI and Excel.

Excel supports multiple states for the Graphic property of the KPIs by using a decimal number, whereas Power BI uses an integer value. Each Graphic can have 3 or 5 possible graphic icons, depending on the value of Expression.

You must be careful choosing a Graphic with 5 states, because their representation is different between Power BI and Excel for the same value. If you want to use only integer values in the model because the same graphic should be visible in both Power BI and Excel, the following table is a simpler reference for Graphic results in Excel. 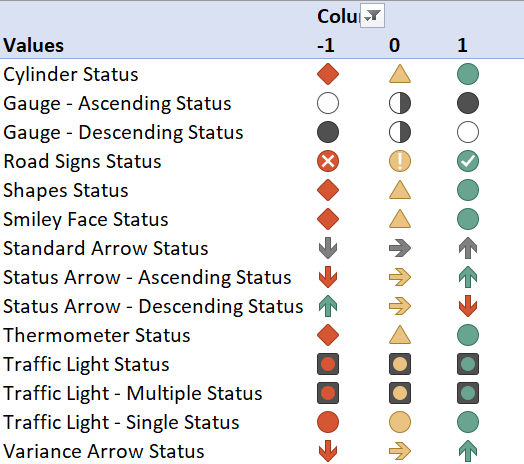 The DAX formulas provided in the Expression properties are evaluated in the filter context of the KPI measure. As you have seen in the explanation of the Graphic visualizations, the Expression value has different interpretations in Excel and Power BI:

The different graphical representation of a KPI Status and Trend between Power BI and Excel limit the options available if you want to enable the KPI consumption from both clients. Power BI does not display any graphic when the value is not recognized, whereas Excel displays the graphic for 1 for any positive value greater than 1, and does not display any graphic for any negative value less than -1.

As shown in the previous examples, the differences between Power BI and Excel might limit the KPI graphics you should consider for your model. This section contains a quick guide to the safest choices based on client requirements.

Options for models consumed by both Power BI and Excel

You should consider only graphics that have the same representation in Excel and Power BI if your model could be consumed in both environments. Even though you create KPIs in a Power BI model, users might use Analyze In Excel. In order to support this scenario, we suggest the following:

The Shapes graphic displays the same result as Cylinder and Smiley Face on both Power BI and Excel. However, Shapes better describes the result you obtain.

For the Trend property, you could use the Standard Arrow graphic if you only use three states and accept the different representations in Excel compared to Power BI. It is important to use an integer value as a result of the Expression; this is because Power BI displays the number instead of the corresponding graphic element if the Expression result has a decimal part such as 0.2 or 1.4.

Options for models consumed by Power BI only

For the Status Graphic property, we suggest the following:

For the Trend Graphic property, we suggest the following:

All the graphics with 5 states can be used with only 3 states if the Expression returns only a number among -2, 0, and 2.

Options for models consumed by Excel only

If Excel is the only client used to display the KPIs of a Tabular model, you can use 3 or 5 states as long as the Expression returns a decimal number included between -1 and 1.

For the Status Graphic property, we suggest the following:

For the Trend Graphic property, we suggest the following:

All the graphics with 5 states can be used with only 3 states if the Expression returns an integer value included between -1 and 1.

Defining KPIs in Tabular models is very useful in obtaining consistent visualizations across different reports and applications. Unfortunately, differences in the supported graphics between Excel and Power BI limit our ability to use several available graphics. We invite you to vote the following idea related to Power BI and Excel in KPI visualization: Microsoft Idea · Matrix/tables should display KPI of a Tabular model like Excel (powerbi.com).