Analysis Services provides many Dynamic Management Views (DMV) to collect information about memory used by a data model. For example, DISCOVER_OBJECT_MEMORY_USAGE is a DMV that provides information about all the objects in memory. You can use such a DMV also to monitor a Multidimensional instance of Analysis Services. Kasper de Jonge created a sample model (BISM Memory Report) that organizes this data in a hierarchical way, making it easy to find the most expensive databases, tables, and columns on a server.

If you want to analyze a particular database, you probably want to look at more detailed information, which are available in other DMVs. However, manual access to individual DMVs is a time-consuming process, and the SQL language available for DMVs is very limited, not allowing groups and joins. For this reason, I created VertiPaq Analyzer, a Power Pivot data model to collect size information for all the objects in a specific database.

Starting with version 1.7, there are two versions of VertiPaq Analyzer included in the ZIP file you can download from http://www.sqlbi.com/tools/vertipaq-analyzer/:

If you need to analyze a Power Pivot data model, you have two options:

When you open the Excel file, you have to setup the connection to the database to monitor. After opening the Power Pivot window: 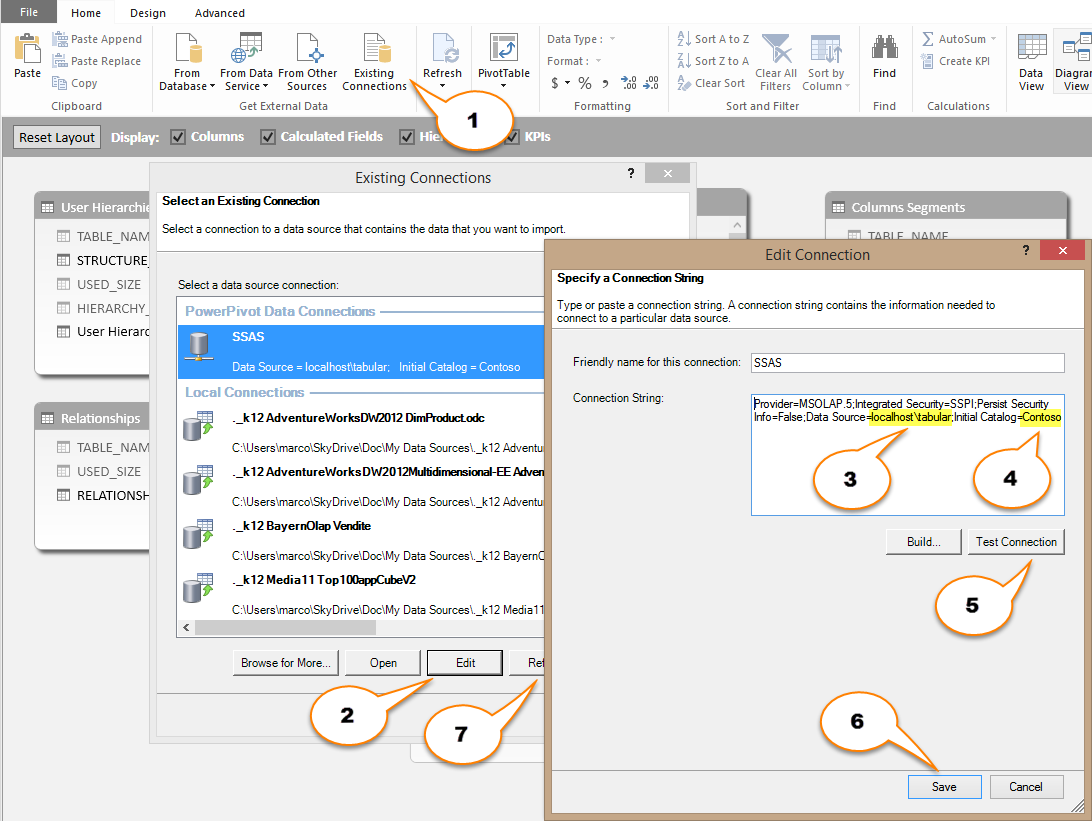 When you connect to Power BI Desktop, you have to keep the Power BI file application open. After you capture the connection port with DAX Studio, you use that connection as the instance name, and then you complete the connection in a similar way as you do for SSAS Tabular. This is the correct sequence: 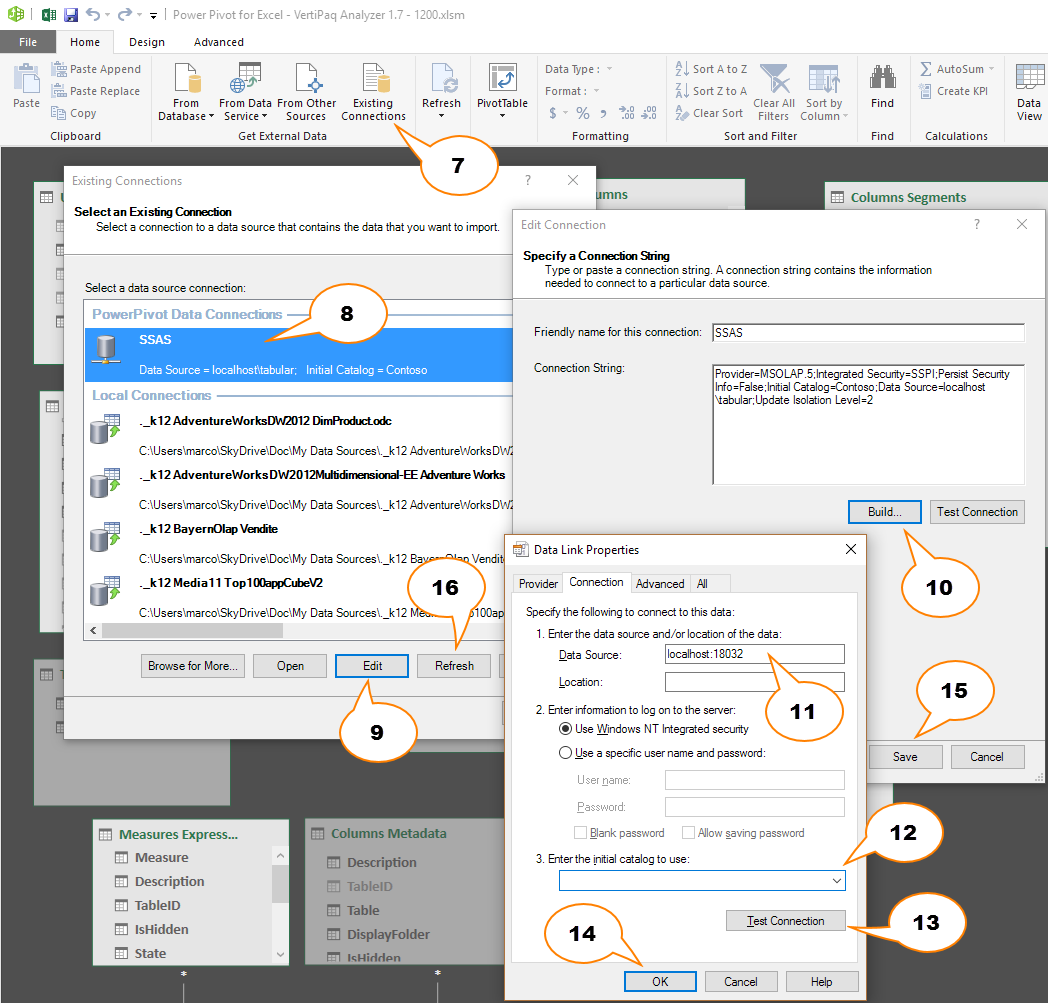 The Excel file includes some pivot tables showing many useful information. The first is Tables, which displays table and column information in a hierarchical way.

Then we have User Hierarchies, which is a detail of the cost of user hierarchies in each table. 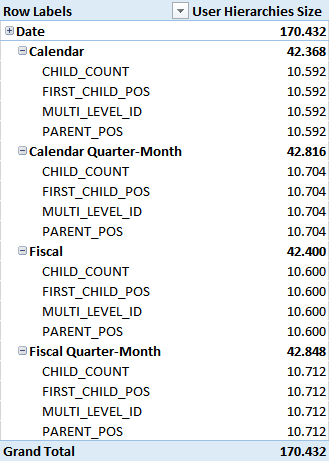 The Compression report is an example of the information you can display about compression applied to table and columns. This example is a recap of the distribution of the segments and their size across different compression types and encoding bits. 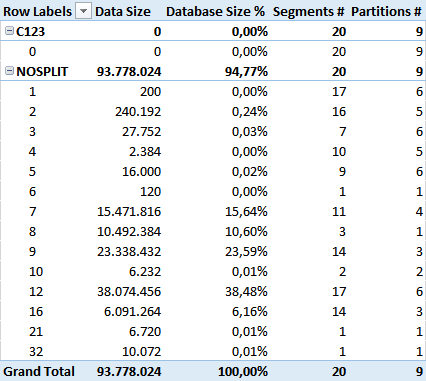 In 1200 compatibility level you have three new worksheets: Measures, Calc. Columns, and Calc. Tables. Each one has a list of the corresponding entities defined in the data model, displaying also the DAX expressions included in the definition. You can also format these expressions by using the Format DAX Expressions button in the VertiPaq Analyzer tab of the Excel ribbon. 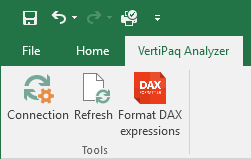 The data model provides a number of measures:

You can browse the data model using the following entities:

The following picture shows the entities imported in the data model from the DMVs. You can see that collecting the information in a meaningful way requires seven different queries, resulting in measures having different granularities. 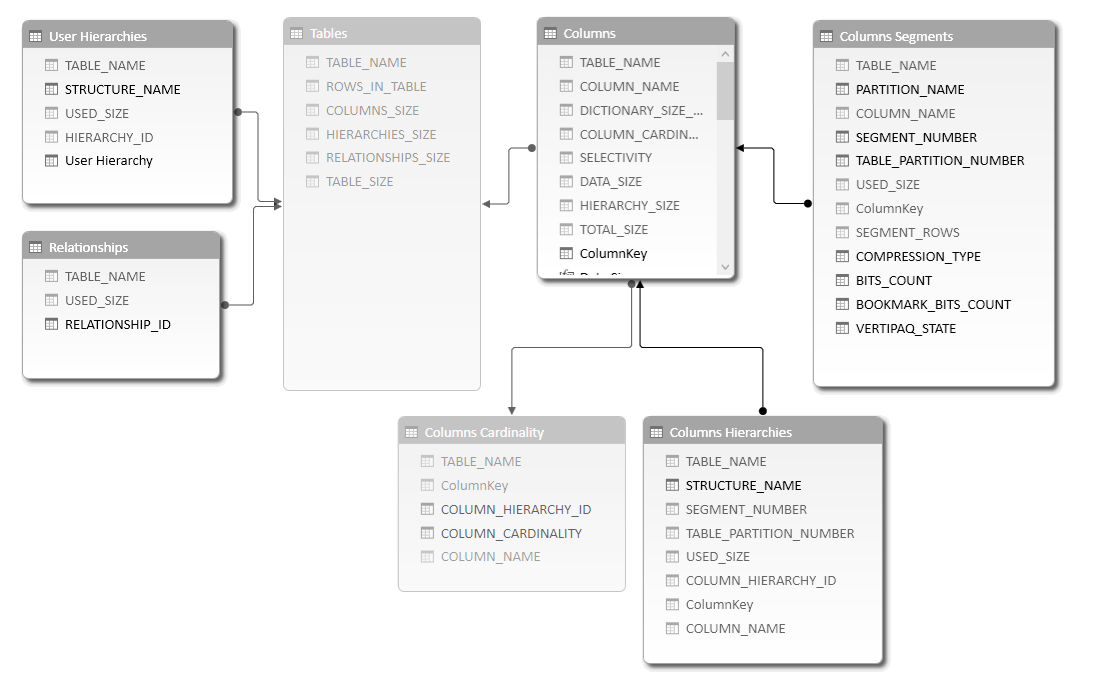 The Tables and Columns Cardinality tables are hidden and used by measures and calculated columns, in order to provide a more intuitive user experience navigating data in Pivot Tables.

Many calculated columns defined in the data model provides numeric information useful if you want to display the data as tables in Excel, without using a pivot table. You can find more information about the DMVs used in this data model, and on the meaning of certain columns and measures, in The Definitive Guide to DAX book.