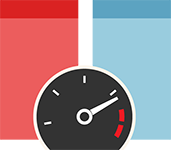 In SQL 2012 the xVelocity engine comes in two different flavors:

It turns out that the two engine run at a comparable speed even if there are important differences that might lead you to choose one against the other in your specific implementation.