Tabular offers the built-in feature of hiding rows of data from specific users. For example, you can create a set of security rules to let a store manager see only the sales of their store. This works fine if your goal is to secure data, which means preventing access to data that a user is not expected to see.

Another common requirement is to be able to select by default, for a store manager, their sales. With that said, store managers can see the data of other stores, but they need to explicitly request it. In other words: by default, the store manager sees the sales of their store only. By using a slicer, they can choose a different combination of stores.

Let us elaborate a bit more with an example. We want to define these rules for the defaults:

By default, Alberto sees the data for stores in China and sales in 2008. Marco sees Germany and the United States in both 2008 and 2009. When either Marco or Alberto browse the report, they can choose different combinations. Nonetheless, without an explicit choice the report shows the default data. For example, below is what Marco would see when browsing the Sales report.

The red label is showing what the selection is. Indeed, the slicers on Calendar Year and CountryRegion are not filtering anything. There are three countries in Store[CountryRegion] with sales, but the report is showing only two countries: Germany and the United States, which are the defaults for Marco. The year works in a similar way: there are many years with data, but because the slicer is not filtering anything the report shows only 2008 and 2009.

The label indicating what the user is seeing is extremely important in reports that use default values. Without the red label, users would have no clue about the fact that they are seeing only a portion of the data. If you plan on providing defaults, plan explanation labels to go along.

Depending on the number of columns for which you want a default value, the code can be rather simple or quite complex. Actually, the solution is simple only in the very special case when you want to provide a default value for one column only. As soon as you have two or more columns, the code – though not that intricate – requires much higher attention to detail.

Default value for only one column

Let us start with the simplest scenario. We choose to use a default value for only the Store[CountryRegion] column. The table containing the default values is DefaultCountry. 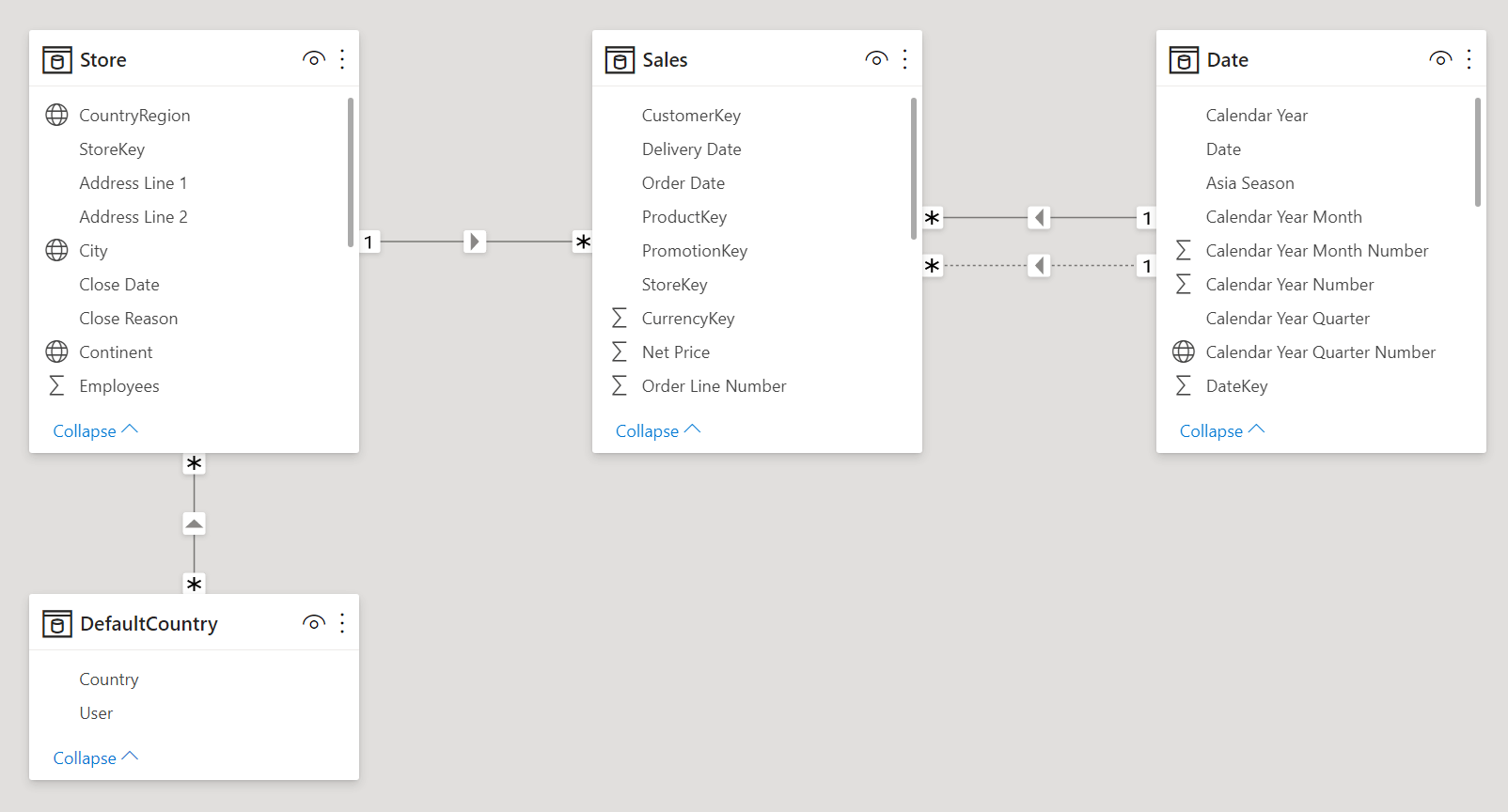 The OnlyCountry calculation item performs three actions. First, it checks whether there is an explicit filter on the Store[CountryRegion] column. If there are any filters, then it just computes SELECTEDMEASURE with no further actions. If no filters are present, then it uses USERPRINCIPALNAME to retrieve the user currently browsing the model and uses it to apply a filter to DefaultCountries. DefaultCountries filters Store automatically because of the relationship:

By using the OnlyCountry calculation item, you see that the report shows larger values for the Sales Amount measure; what is more, the red label highlights that all years are visible. The reason is that this first calculation item only applies the default to the Store[Country] column, showing all the years.

The solution outlined so far is neat and simple. Its major drawback is that it works only when you have one column for the default values. However, this simple solution cannot work with multiple columns.

First, we added the DefaultYear table to the data model to provide a default filter for the year.

In the next report we use the default value for the Store[CountryRegion] column, whereas we are using 2007 for the year. Indeed, our user explicitly asked for a year.

Therefore, if one of the tables with default values must be filtered, it cannot be part of the CALCULATE statement and the code must take this into account.

A first solution – that makes sense when you have only two columns – is based on a calculation item named YES that activates the default filtering only on the selected Year and/or Country attributes:

This solution works with two columns. The code checks which tables must be filtered and executes CALCULATE with that table only. If both tables need a filter because the user selected neither years nor countries, then CALCULATE filters both columns with the default values of the current user.

Clearly, by adding more default columns this solution would no longer work, because the number of combinations quickly becomes unmanageable. In order to obtain a generic version that works on any number of columns, we should change our perspective. We can no longer use filters on the Default-prefixed tables and trust that they will propagate through the model. The reason is that we now have multiple tables: some tables might require a filter, while other tables must be left unfiltered.

There is no way to choose whether to apply a filter or not to a table in a single CALCULATE function in DAX. You can select the rows that will be filtered, but you cannot choose whether to apply the filter or not. In the most generic scenario, we have multiple tables that may or may not be filtered. In the previous solution, we solved the problem by using different branches of SWITCH: in some we filtered both tables, in others we filtered only one. If we have more than two tables, we cannot rely on SWITCH anymore, because the number of branches would grow exponentially.

This means that we need to use a single CALCULATE statement that is controlled by variables for the filters. We place the filters that we want to apply into variables, and then we apply them all in a single CALCULATE. We might want to store the entire table (ALL) in the variables for the tables that we want not to filter. The problem is that if you place the result of ALL ( DefaultYear ) in a variable and use that variable as a filter over the Date table, 2007 will not be visible because it is not included in the default filters of any customer. In other words, filtering all the rows of a table is very different from not filtering the table.

The consequence is that in the presence of multiple default columns, the code can no longer rely on a filter on the default tables. Instead, it must compute the set of visible values on the original model tables, and then apply the filter there. As such, it is more complex.

We created a calculation item named YES-Generic that activates the default filtering on both the Year and Country attributes. Keep in mind that the relationships between the default tables and the model tables are not used with this approach. We left the relationships in the model to test the previous calculation item for two default columns, but they can be removed if you want to implement this second technique.

Here is the code:

In the end, YearsToUse is a table that filters Date[Calendar Year] containing the years we want to show.

The next code block – including the variables ContriesAlreadyFiltered, UserDefaultCountries, and CountriesToUse – executes the very same logic on the Store[Country] column. Finally, we compute in Result the SELECTEDMEASURE applying the filters as needed.

As you see, in Result both columns are always filtered. There is no way you can avoid one of the two filters, and if the filter were on the Default-prefixed tables, that would break the mechanism.

With the calculation item working, we can now take a quick look at the Default Label measure used to show the visible values in the red label of the report:

The measure checks if there are filters on either the Store[CountryRegion] column or on the Date[Calendar Year] column. If there is a filter, it builds a string containing the visible values separated by a comma.

Last, a few words about performance. Among the different solutions proposed, the only one with a low impact from the performance point of view is the first one, which works when you have a default for only one column. The version with two columns is slower and more complex, and the most generic version contains a lot of code that requires the formula engine to kick in heavily. Besides, even though we showed a generic version with only two columns, you can easily extend it to handle more defaults. It will however turn out to be even slower. Therefore, expect a strong impact on performance.

The requirement to have default values for columns is very common, and we certainly hope that the feature will be added as a model property at some point. Before then, you can build a solution by mixing calculation groups, DAX code and attention to small details, thus providing different defaults to different users.

Returns the measure that is currently being evaluated.

Returns different results depending on the value of an expression.