UPDATE 2017-06-07: the Windows Azure Marketplace is no longer available, so certain links included in this article no longer work.

First of all, we will use a Calendar table as an example, also because it is a very common scenario in which you will want to use this feature. In order to create a Calendar table you can use the DateStream data source on Windows Azure Marketplace. In order to get just a range of years, you have to manually change the URL by using the URL/OData syntax described by Boyan Penev in his blog. 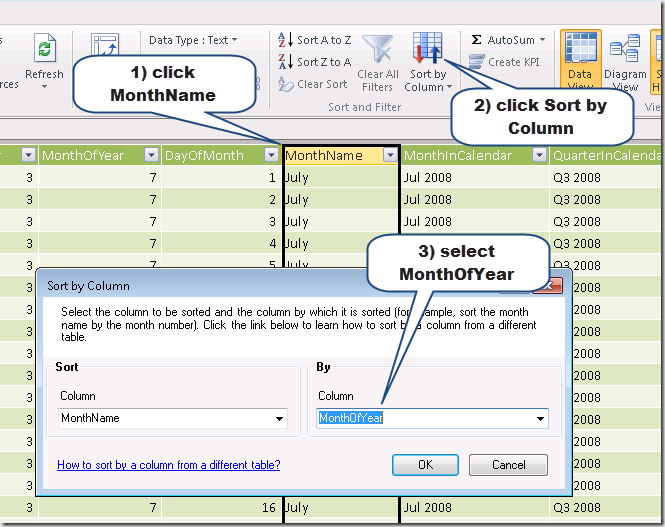 At this point, when you will browse your data with a PivotTable or Power View you will see the months sorted in the proper order. However, you can discover that it is not so easy to set the proper sort for the MonthInCalendar column, which contains 12 months for each year and has to be sorted by Year and Month Number.

The problem is that we do not have a corresponding column to use for the sorting. We might try to use: 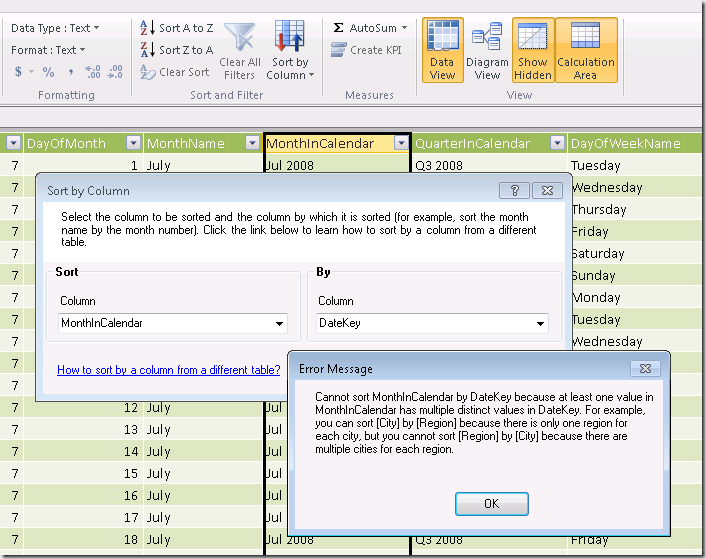 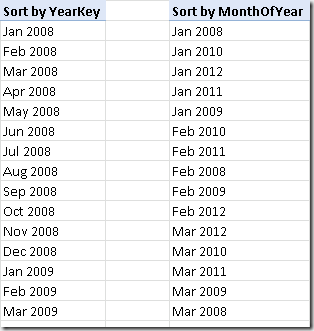 In order to solve this issue, we need a column that has the same granularity as the MonthInCalendar column (year and month). We can create a calculated column YearMonth with the formula [YearKey] * 100 + [MonthOfYear], as you can see in the following picture:

Such a column has to be specified as the By column in the Sort by Column dialog box that you have seen before, producing as a result the expected sort order.

The same technique can be applied to other composite columns such as, for instance, QuarterInCalendar. These columns are important in case you want to display, for example, a chart where data are plotted month by month. Using a column such as MonthInCalendar is also useful when you define a hierarchy Year-Month-Day. In fact, you have to remember that in a report it could be not obvious what is the year to which a month belongs to, and having a column containing both month name and year could be fundamental in order to make the report easy to read.

In this article you have seen how to control the sort order of a column in PowerPivot and BISM Tabular. The lesson learned is that you may have to create a calculated column in order to provide the sort order information with the same granularity of the column that you want to sort in a custom way.